Whether it’s to commemorate the sacrifice of Christ or to welcome in the new spring, the holiday of Easter is celebrated in a big way all over Italy, with each town or village having their own local way of commemorating the occasion. 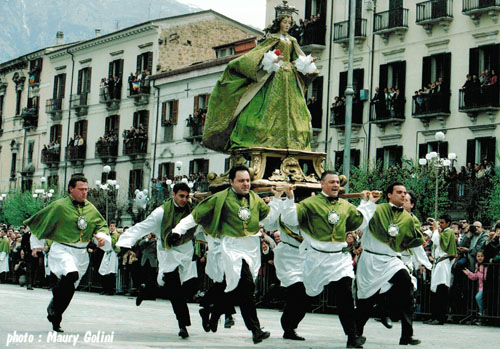 The village of Sulmona is Abruzzo is one of these such towns, and has, since the 11th century, hosted ‘La Madonna che Scappa’ (the Running Madonna) every Easter Sunday. This year is no different, and on March 27 there will once again be the opportunity to witness this incredible event.

The event is organised by the Santa Maria di Loreto Brotherhood, who wear traditional white tunics and shiny green capes. They start off the event by entering the Piazza Garibaldi accompanied by a brass band. Some of the members also carry statues of St Peter and St John, believed to have been the first to see the ‘rebirth’, while other members also carry heavy lamps adorned with white rosettes. The centrepiece of the procession, however, is a statue of the risen Jesus, which is carefully placed in front of the Roman aqueduct that surrounds the piazza. This is followed by an open air mass, led by the Bishop of Sulmona, with the choir singing and chanting important hymns.

The main event now approaches, and by this point, the piazza is packed tightly with people each trying to get a good view. At the strike of noon, the statues of the saints are carried down to the Chiesa di San Filippo Neri, which dates back to the 14th century, where each takes it in turns to cajole the statue of Madonna of Loreto, who has been shut behind the doors since the night before her son’s resurrection. Once the feat has been attempted three times, the Madonna finally emerges, wrapped in a black mourning coat and holding a white handkerchief, held aloft by six members of the brotherhood.

She is then carried down into the piazza, through the crowds, followed by the two apostles, and upon seeing her reborn son positioned in front of the aqueduct, loses her mourning coat to reveal a bright green dress, symbolising new life. As the cloak is whipped off, twelve doves emerge, and bangers are set off, with the Madonna appearing to fly joyous towards her son as they meet at the end of the piazza. Once they meet, there’s a huge fanfare, with bells ringing, fireworks, the brass band playing and the crowd excitedly embracing each other, creating an atmosphere unlike no other and a memory you’ll never forget from your Abruzzo holidays.