Pasta: a staple of your holidays in Abruzzo

Pasta is an everyday staple of the diet of the Abruzzese people, which can be seen not only in its food, but also in its industry. If you decide to eat out on your holidays in Abruzzo, you’re bound to find pasta dishes on every menu. Alongside the southern region of Campania, Abruzzo is one of the country’s largest pasta-making regions, boasting no fewer than 13 producers, which are mostly found in the area of Chieti. 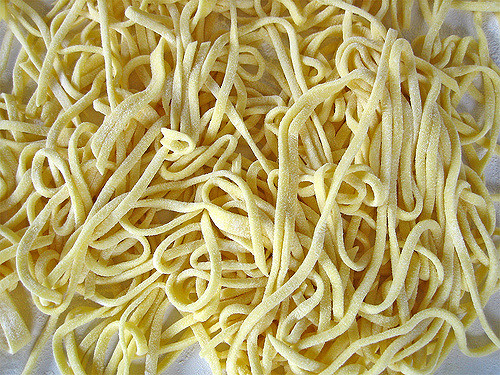 The small town of Fara San Martino in particular is a prominent pasta-making player, as it is home to two of Italy’s largest pasta producers, Di Cecco and Delverde, as well as Pasta Cocco, who have the honour of making pasta for the Vatican City.

While many Italians make pasta from scratch occasionally, when they wish to throw together a quick meal, like us in the UK, they will rely on dried pasta. In Abruzzo, dried pasta is produced both in larger and artisanal factories, dried for a long time to keep the pasta rigid and so that it can keep well in packets. The most common process for this is to lay the pasta out on bronze drawing blocks, which dry the pasta at low temperatures for as long as 60 hours. Drying the pasta out for longer and at a lower temperature helps the pasta to develop a surface slightly rough in texture, which the accompanying sauce can cling to.

One of Abruzzo’s pasta specialities is maccheroni alla chitarra (guitar pasta), named after the guitar-shaped tool used to make the pasta. The chitarra is made from a rectangular wooden frame, over which fine metal strings, spread at millimetre intervals, are stretched. To tighten the strings as they loosen during use, the pasta maker uses a special key, and the chitarra also includes a collecting tray, where the pasta falls after passing through it. 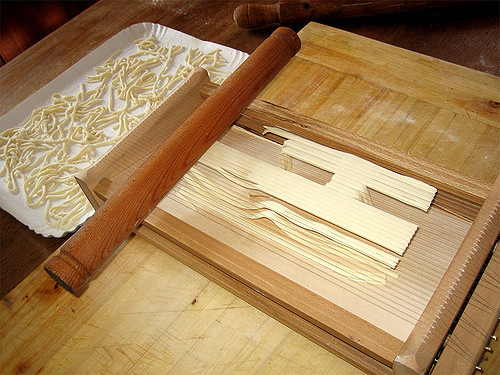 In order to give the pasta its shape, the cook places a very thinly rolled out sheet of pasta dough over the strings, before rolling over it with a rolling pin, cutting the pasta strands with the fine metal strings. Maccheroni alla chitarra is slightly different to conventional long pasta in that it has a square-shaped cross section rather than a round one. Traditionally, pasta alla chitarra is served in several different ways; with a spicy tomato sauce, in a sauce made with lamb, or accompanied with chopped up bacon fried in butter.