Make your very own delicious Italian gelato at home 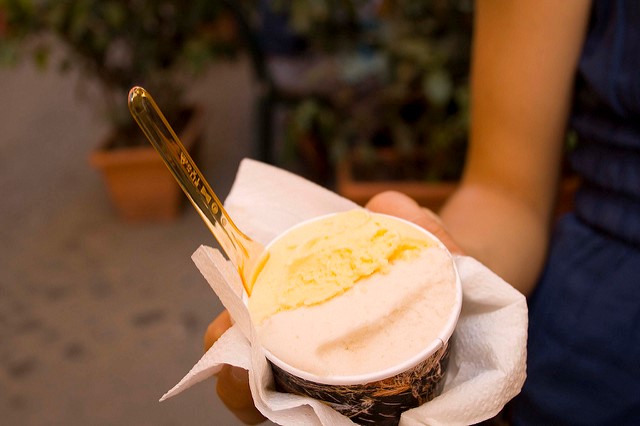 On a sunny day in Italy, you’ll find it impossible to resist the lures of the gelaterias – shops selling delicious gelati, a special Italian variety of ice cream, in every flavour you can imagine – while you venture out for an afternoon from one of our villas. Italy is loved the world over for its cuisine, with gelato being one of the sweet favourites. Characterised by its intense flavour and dense texture, many people have fallen in love with gelato over the years. If you love gelato just as much as we do, you’ll be glad to know we have a recipe so you can try your hand at making this authentic Italian dessert in your own home. This recipe is for the basic variety, often known as gelato di crema, though this acts as the base for all gelato varieties, which have flavours such as fruit puree, chocolate or nuts added during the process.

150g sugar (ideally caster sugar, but granulated sugar can be used too)

1 vanilla pod, split down the side, or a piece of lemon zest, for flavour (optional)

Add the milk, or milk and cream combination, in with half of the sugar into a saucepan, as well as the vanilla pod or lemon zest if you decide to include them. Bring the mixture almost to a boil, taking the pan off the heat as soon as the first bubbles begin to appear on the surface. To draw out more of the flavour from the vanilla pod or lemon zest, try to prolong the boiling process as much as possible.

While the milk and sugar mixture is cooling, put the egg yolks and the other half of the sugar together into an electric mixer, beating the yolks at a high setting, until the yolks and sugar combine completely. As the mixer works you should be able to see ripples in the mixture and the end result should have a creamy texture.

Turn your electric mixer onto a lower setting. Remove the vanilla pod or lemon zest, if you have used them, from your cooled milk mixture, and then slowly add the milk mixture into the mixer in a steady stream. Mix until everything is well combined.

Bring the mixture back into the saucepan, and heat gently. As the mixture warms up, the eggs should thicken the mixture into the consistency of a thin custard, though you should ensure you don’t do it for so long that the eggs begin to curdle. You should gradually increase the heat from low to medium, stirring regularly until you feel the mixture beginning to thicken; when this happens you should lower the heat immediately.

Once the mixture has thickened to a nice consistency, remove it from the heat, before pouring it into a bowl to chill in the fridge for around an hour. Every now and then, you should stir the mixture from time to time to prevent a film from forming on the top.

After the mixture has been thoroughly chilled, pour it into an ice cream maker and follow the instructions that came with your machine (typically between 20 and 30 minutes). This will make soft-serve gelato ready to eat, but for a firmer gelato, you can always freeze it for an hour or two before serving. If you’re planning on keeping your gelato frozen for a longer time, ensure it is given around 15 minutes to defrost before serving.