Five stretches of coastline to explore in Tuscany

Whether you prefer shingled shorelines or soft white sand, rolling waves or crystal clear waters, you can find all this and more in Tuscany. Everyone has different preferences when it comes to the beach, making it impossible to write a definitive list of the top five. Instead here are five must see stretches of spectacular coastline in Tuscany with beaches that have been presented with the ‘Bandiera Blu’ or ‘The Blue Flag’. Widely used around the world, The Blue Flag is awarded based on the cleanliness of the beach and the water, the facilities, and much more. If you are staying in one of our villas in Tuscany then be sure to check out some of these beaches during your Italian getaway. 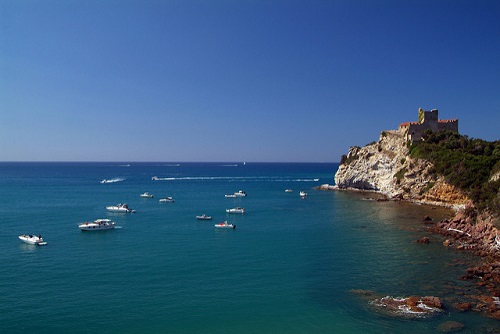 Versilia is one of the most popular beach destinations in Tuscany thanks to its enticing mix of culture, glamour and fun. Unsurprisingly, these long wide beaches are where Italy’s elite come to unwind. Forte dei Marmi is built around the ruins of an ancient fortress, and is home to some of Tuscany’s most famous night spots. Also along this lush and pinewood lined stretch of coast is the Pietrasanta Marina, which is said to be one of the most beautiful beaches in Italy. The town of Pietrasanta is the artistic hub of Versilia, and is often referred to as the Little Athens of Italy. Michelangelo was the first sculptor to work with the local white marble, and sculptures are dotted all over the ornamental little town.

The Northern coastal regions of Tuscany are surrounded by the Apennine Mountains, lending this stretch of coast a stunning backdrop. The Riviera Apuana and Lunigiana area boasts 15km of sandy beach, and the white marble cliffs edging the beaches descend all the way to the water’s edge. Dotted amongst the hills are dozens of quaint medieval hamlets and crooked castles which can transport you back in time. The region is stunning all year round and plenty of visitors can be found exploring the mountains and marble quarries in the colder months.

The Pisan coastline is less mountainous than the northern region, and the oceanfront is nestled amongst miles of sweet smelling pine forest. This makes the area perfect for long walks, bicycle rides or travelling on horseback. Tirrenia borders the glassy waters of the Tyrrhenian Sea, and is known for its sandy dunes and cool nightlife, while Calambrone is a great spot for families with young children. Several rocky barriers lie between the open sea and the beach, where sporting activities are often held by the surrounding resorts.

For wine connoisseurs and seafood lovers the Etruscan Coast has it all. Home to some of Tuscany’s most loved beaches, the rocky costal paths make for stunning rugged scenic walks, and the remnants of Etruscan civilizations are scattered throughout the towns. Costa degli Etruschi directly links to gastronomic road ‘Strada del Vino’, which is a hub for the region’s many cultural events, from open air concerts to late night parties on the soft sands.

Stretching from the ancient commune of Capalbio, the green forests and rocky hills of Maremma run along to Argentario, where the lagoons attract a plethora of birdlife. This magical shoreline is also home of Castiglione della Pescaia, or ‘Castiglione’, which is the second most visited place in Tuscany. Castiglione has a vibrant night circuit, and the region’s natural reserve Diaccia Botrona attracts an array of unusual wildlife – you might even spot a flamingo or two! The best beach for families along this coastline is Marina di Alberese, which boasts wide spaces and a protective pine forest border.