A traveller’s guide to Lecce, Puglia

Often regarded as the Baroque masterpiece of southern Italy, Lecce is one of the largest cities in Puglia, renowned for its stunning architecture. The surrounding region of Puglia is still largely untouched and overlooked by tourists, making Lecce an excellent place to visit on your holidays in Puglia without the large crowds of other Italian cities such as Rome or Milan. 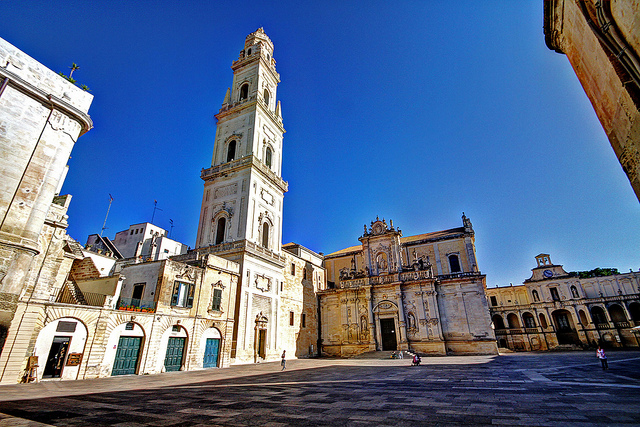 Though much of the town’s famous architecture dates from the 17th century, Lecce’s history actually goes back a long way, and visitors can still see the ruins of a Roman theatre and amphitheatre, giving you a glance at what the city once was thousands of years ago. The baroque architecture fills much of the town, however, reflecting an age of prosperity, where as the wealth of the town grew, so too did the grandeur of the buildings. What makes Lecce’s architecture stand out, however, is that the fashionable Baroque style was adapted to suit the materials available at the time – a soft local stone – with the style becoming known as Barocco Leccese.

A great place to start when exploring the centre of Lecce is the historic centre, or centro storico, where you can easily spend a day or two venturing through the narrow lanes and streets, discovering far-flung Baroque churches and palaces. Perhaps the most extravagant of them all is the Basilica di Santa Croce, with its eye-catching façade, decorated with all kinds of strange beasts and allegories. Each Baroque building is lined with cherubs, or putti, each carrying or surrounded by different items. Even some of the buildings which remain unfinished you’ll come across are still marvellous to look at.

The historic town has two main focal points: the Piazza Sant’Oronzo and the Piazza del Duomo. In Piazza Sant’Oronzo, the ancient and the modern come together, with civic buildings found alongside the excavated Roman amphitheatre. The Piazza del Duomo, meanwhile is an unusual interpretation of the Italian cathedral square found in most cities, the cathedral located in a peaceful enclosure alongside its towering campanile.

Perhaps the most ‘touristy’ thing you’ll find in the old town is the trenino, a tourist train taking you through the main highlights. This is a fun way to take in what the old town has to offer if you’re in a hurry.

Alongside the Baroque buildings, there’s plenty of other interesting things to see, such as the Roman theatre and its museum, the Museo Teatro Romano, which give fascinating insights into the life of the Luccese under Roman rule. If you’re interested to find out more about the city’s ancient history, the Museo Provinciale, the main archaeological museum, has a number of interesting exhibits spanning the long history of Puglia. Entry is free, and takes visitors on a journey from before the Greeks to after the Greek and Roman invasions.

After exploring the city, another great way to soak up the atmosphere is just to sit back and watch the world go by. Like much of southern Italy, the streets empty during lunchtime, when the Pugliese enjoy a leisurely lunchtime break for hours at a time. The streets get busy again in the cooler evening air, when everyone alike from young couples to families take part in the daily passeggiata, a gentle stroll through the city streets after a relaxed evening meal.