The Romantic History of Masseria Cupina 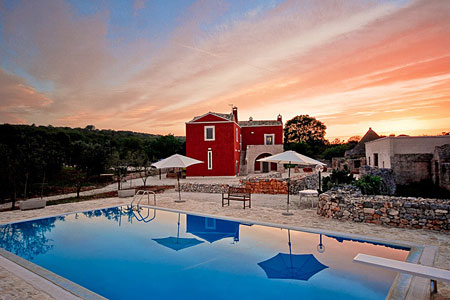 In the 18th century, a rich and powerful Puglian nobleman had a daughter. As the daughter grew up she became very close to her father. But when she reached her early twenties, she fell in love with a local farmer.

Although farming was the mainstay of life in Puglia, society was strictly segregated. The rich did not mix with the poor, let alone marry them. Her father forbade the union. But the daughter’s heart was set. Love overcame the barriers of class and privilege. She married her lover. Her father was so angry he refused to speak to her ever again.

But seeing her love was genuine, his heart softened. He decided to build his daughter a farmhouse. At least, he thought, she will have a comfortable home and the means to make a good living. The masseria was named ‘Cupina’ (meaning ‘not so black’) to reflect the bittersweet nature of the gift.

By the mid 20th century, however, the farmhouse had been abandoned. In another fairy tale echo, the building became overgrown and derelict.

It remained that way until 2004 when the masseria was rescued by its current owners and lavished with love once again.