Perhaps the most important event in Siena’s annual calendar, Il Palio, is about to take place in the heart of the city at the Piazza del Campo on July 2. 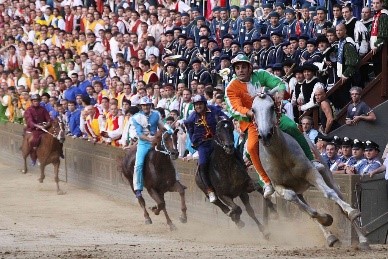 Originating from the 6th century, the foundations of the event are based on a rivalry of the various Sienese ‘contrade’, areas which the city is divided into. Although there were originally 59 of these, 17 remain today, with 10 of these taking part in the July historical pageant and race, with another selection of 10 competing in the second Palio race, which takes place on August 16.

Il Palio is a hugely culturally important event for the people of Siena, as every citizen belongs to one of these contrade, and participates in the organisation of the Palio and the life of the contrada all year round, having a great passion for the event when the time comes.

With several rules and traditions added over the centuries, the event itself is highly complex, and the entire day is dedicated to the event. The day begins at around 8am with the Messa del Fantino, a mass for the horse jockeys, celebrated by the Bishop. This is followed by the ‘segnatura dei fantini’, confirming the jockeys that will be racing later on in the day. After this, each horse is blessed by their Contrada, with a large parade in historical costume taking place throughout the city, spanning the majority of the afternoon.

Following this, the race festivities begin, with the horses and jockeys entering the Piazza del Campo. The competing horses line up in the Mossa, where the complex starting phase takes place and rivalries begin to run deep. Once the race begins, the horses must run three laps around the Campo, with the first horse to cross the finish line, even if they arrive without their jockey, winning the race. The winning contrada receives a grand prize of the drappellone, a large painted canvas created with a different design every year, to be displayed in their contrada museum. They then proceed to the church of Provenza in order to offer the ‘Te Deum’, or prayer of thanks.

If you’re planning on visiting Siena and experiencing its vibrant culture and historic traditions such as Il Palio first hand, visit our website to find out more about and rent our wonderful villas in Tuscany, Italy.