Sea turtles return to nest off the coast of Sicily

Italian conservationists have welcomed the news that loggerhead turtles, which are currently facing extinction in the Mediterranean, have returned to lay their eggs at the historical nesting site of Pozzolana di Ponente, found on the island of Linosa, off the coast of Sicily. 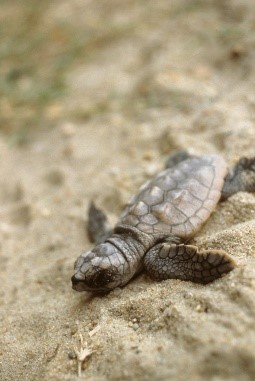 According to the World Wildlife Fund (WWF), loggerhead turtles are especially scarce in Italian waters, and there are only 30-40 nesting sites left, found in Puglia, Calabria, Sicily and Sardinia, which are mainly only occasional breeding grounds.

Last week, the turtles returned to their old breeding ground, making their way up the beach to dig holes in the ground, where the female turtles would deposit their eggs. Since the holes and tracks were discovered by biologists, the area has been locked down and will be guarded 24/7 for a 60 day incubation period, in order to prevent interference from humans or predators. Once this period is over, the baby turtles will emerge from their eggs, dig their way out of the nest and wander into the sea for the first time.

Following the recent news of flamingos returning to nest in Sicily, this is further good news for the biodiversity of Italy and the Mediterranean, and is a good sign for replenishing the numbers of loggerhead turtles found in the wild. Loggerhead turtles live for between 47 and 67 years in the wild, with the newly-hatched youngsters not able to reproduce offspring of their own for between 13 and 17 years.

Italy is a country surrounded by beautiful, stunning coastline, which is home to a number of fascinating and varied wildlife and gorgeous scenery, and Essential Italy has a range of excellent accommodation which brings you the very best of this, from villas in Sicily to hotels in Tuscany.