The forgotten village of Consonno, nestled in the hills below the Alps of Lombardy, is will now be revived for a giant game of hide and seek. The village was first built up in 1968 by Count Mario Bagno in the image of Las Vegas, replacing the once ancient rural town that sat there. It was set with its own Grand Hotel Plaza, night club, a zoo and sightseeing train- it was once the holiday for every party-goer.

After a decline in visitors, due to road blockages which stopped visitors travelling from nearing towns, the party town of Consonno was no longer. Nowadays the atmospheric village, with neglected and unkempt buildings that sit against a beautifully natural backdrop, looks like the setting of Hollywood films. And that’s exactly what it has been used for! The abandoned village is also occasionally used for music videos as well due to the village’s unique character. 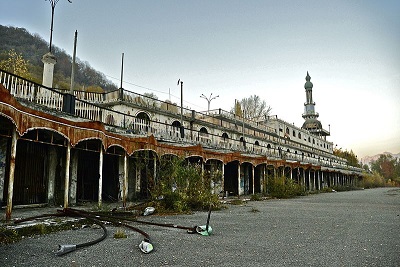 Walking through the village is like walking through the scene of a movie; you half expect the generic tumble weed to creep across your path. But the town is set to come to life on September 3rd and 4th to host the sixth annual ‘Nascondino World Championship’. The championship is a national hide-and-seek competition that brings hundreds of Italians to participate in a fun but competitive event, monitored by referees and games coordinators, and is even set with teams and its own set of rules. Participating teams are split into four, with one person per group allocated to hide while a neutral search team count for 60 seconds. The hider then has ten minutes to hit a target in an open field without being found or caught by the search team. The competition lasts for two days and a winner is declared at the end. The competition is fun and the rules simple, making it the perfect experience for families with older children or group holidays.

The championship was first organised in 2010 in Bergamo, Italy through the local publication of CTRL magazine. It was decided later by the organising team that Consonno would be the perfect setting for the competition with its many abandoned buildings, that make perfect hiding spots.

Hide and seek is beginning to see a lot of international interest, with several people campaigning to include it in the 2020 Olympics in Tokyo. Yasuo Hazaki, a graduate of Nippon Sport Science University, began campaigns in 2013 to get this event included within our next Olympics. The game Hazaki was promoting had slightly different rules to the competition run in Italy, but he was intrigued to know the rules behind the Nascondino World Championship. The Italian championship organisers have been in contact with Hazaki to help with the campaign which proved unsuccessful at the moment. (We would love to see a hide and seek tournament as part of the Olympics!)

Despite this initial setback, year on year the championship sees more interest in its concept, especially from international audiences. The organisation decided to change the competition name from the simple ‘Nascondino’, which is Italian for ‘hide and seek’, to the Nascondino World Championship with the hope, according to organiser Giorgio Moratti, to attract international participants.

If you’re looking to plan your Italian holidays with unique and fun experiences, this could be the event for you!