The ultimate guide to Palermo: Italian capital of culture 2018

The Sicilian capital city of Palermo has been named “Italian Capital of Culture 2018”, beating the likes of Alghero, Montebelluna and Recanati to achieve this prestigious recognition. This title will last for one year, and the economic benefits it is set to receive will help to carry out initiatives within the city, which was also recently crowned the Capital of Young People 2017. So, if you’re interested in culture or are young, (in body or in heart!) then you may want to consider the increasingly popular location of Palermo for your holiday destination in 2017. We have an extensive range of family villas in Sicily for you to check out for the perfect combination of luxury, relaxation and exploring during your time in Palermo. We’ve put together a guide of what to look out for during your time here, as well as things to do, see, eat and drink. 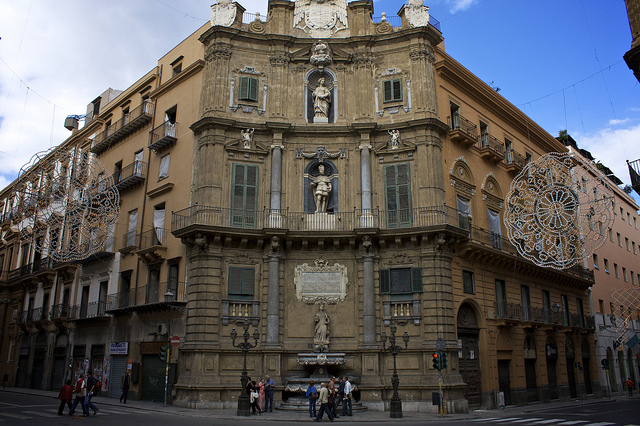 There is a plethora of worthy sites to visit in Palermo and it is widely acknowledged that you need three days at the very least, in order to see the highlights of this wonderful European city. Here are just some of the must-see spots to check out during your holiday:

Given the range of different influences that have swept through the city, it comes as no surprise that the most prominent characteristic of the Duomo is the many architectural styles that can be spotted throughout the landmark. The exterior demonstrates the Gothic style of the 13th-14th centuries whilst the dome itself provides an insight to the style of the 18th-century. A highlight to the collection is the cap-like crown of Constance of Aragon, which was removed from her tomb in the 18th century. The cathedral is a great way to start your holiday, losing yourself in the rich history of royals, rulers and emperors whilst getting a feel for authentic Sicilian cultures and lifestyles and why they are in place.

After a lengthy restoration, the Teatro Massimo reopened its doors in May 1997, after being considered one of the largest theatres in Europe in its early days, with a capacity for over 3,000 spectators. Due to new and improved safety regulations, the theatre can now hold around 1,350 in the auditorium, and represents the high point of a typically, unapologetically Italian-style theatre. The atmosphere of watching a show in this venue is unparalleled, with a colour scheme of red and gold and impressive acoustics to accompany performances. For a truly Italian experience, try and catch an opera show at this venue for a night you won’t be forgetting any time soon.

No holiday to Palermo is complete without a visit to the outdoor markets. Famous markets in the capital city include the Vucciria, Ballaro and Borgo Vecchio, all of which bring something different to the table when it comes to the purchasing of Italian goods, old and new. A price-buster’s paradise, each market is full of all kinds of treasures and is a great way to integrate yourself and connect with the Palermo locals Monday through Saturday, as well as sampling some of the incredible street food on offer.

Catacombs of the Capuchins

One of the most impressive places to visit in the world, the Capuchin Catacombs of Palermo are certainly one for the bucket list during your time in Sicily. The site began as a burial place of rest of the deceased monks of the monastery, but the pit in the first room soon became full. After two years of work, a new cemetery was made behind the main altar, and some of the brothers were to be transferred to the new resting place. However upon removal, the friars found that forty five of the corpses had been naturally mummified and preserved, with recognisable faces resist decomposition. This spectacle is a fine example of the customs and traditions of the people of Palermo from the 17th-19th-century, and is well worth the visit during your time in Palermo. Faces of the past await you…

As mentioned previously, the infamous outdoor markets are the best place to get a taste of authentic Sicilian cuisine, with opportunities to try a variety of traditional dishes at fairly low cost. Highlights and specialities include pane e panelli, chickpea-flour fritters served in bread, crocche, potato croquettes with anchovies and cheese, and, if you’re feeling brave, pane con la milza, which is essentially bread with spleen.

A good spot to head to is La Kalsa, where the streets between Piazza Garibaldi and Piazza Magione, which is packed with bars and pubs, oozing with atmosphere. When in Rome is a popular saying applied to holidaying in Italy, and it can certainly be applied to your time in Palermo. During your time away, don’t be afraid to try new things and trust that the professional Italian chefs know what they’re doing. We’ve found that any Italian delicacies sampled go down best with a tipple of vino…you are on holiday after all…

Pleasant weather graces Sicily in spring, which is also when the street markets are overflowing with the best new-season produce. A visit in July will allow you to join in with the crowds celebrating Santa Rosalia, the city’s patron saint whose image can be seen paraded round the town on an exquisitely decorated carriage and a grand finale of fireworks on the waterfront. Summertime also sees the best conditions for swimming on the local beaches and gives you the best chance to catch an open-air performance in the Teatro di Verdura. Late summer and early autumn bring optimum diving conditions without the throngs  of tourists as well as the chance to celebrate the start of a new opera season.

Palermo offers fantastic opportunities for a holiday the whole family can enjoy, as you lose yourself in stunning beaches, rich and versatile history and delicious Sicilian cuisine. Should the city ever get too much, day trips around the island come highly recommended, so check out the volcanic landscapes of Etna or go for a try-dive on one of the islands nearby. After being named Capital of Culture for Italy in 2018, there’s no better time to visit, so check out our villas today and come and see what all the fuss is about!