Following a renovation project which lasted two years, the historic headquarters of the Venerabile Arciconfraternita della Misericordia in Florence, one of the oldest charitable organisations in the world, has reopened its museum, which displays important artefacts from across its 700-year history. 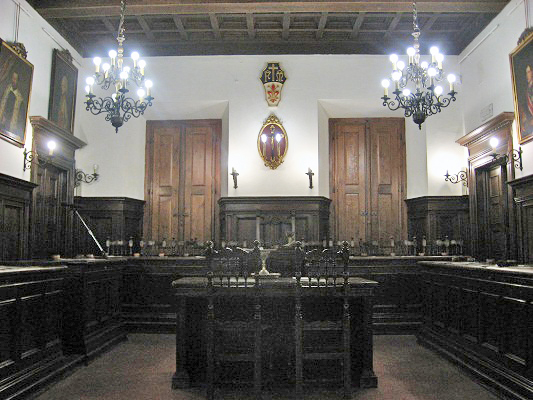 Located in Piazza del Duomo alongside many of Florence’s most popular attractions, including the Duomo itself, the museum has been given a completely new layout, designed by architecture firm Noferi-Locorotondo. The new layout has created space to screen films in, with the museum playing four films during its opening hours, charting significant chapters in the organisation’s and the city’s history, such as the plague epidemic of 1348, and the critical role of the Arciconfraternita, who formed the Misericordia.

Spread across 14 rooms are varied collections of artefacts including manuscripts, furniture and everyday objects which demonstrate the work that the Misericordia has done to help the people of Florence over the centuries since its founding in 1244. The museum also has a sizeable art collection, reflecting the generosity of the charity’s donors, including Carlo Dolci’s St John the Baptist and Dirck van Baburen’s Christ Amongst the Doctors, which is to shortly be displayed in New York’s Metropolitan Museum of Art.

In the Misericordia’s early years, the activity consisted of helping people in need, burying the poor and providing dowries to indigent girls, though following the illness that struck Florence from the 14th century onwards, their main task became carrying sick people to the town’s hospitals. They still operate today, helping with services such as transport to hospitals, helplines, lending of health equipment, social services and food aid.

Located near our Tuscany holiday villas, the museum makes for a fascinating and educational trip giving an insight into several centuries of Florence’s history, with entry free of charge.

You may also enjoy:

• Florence’s cathedral museum to reopen to the public