One of the major annual events to take place in the historic city of Assisi, near our villas in Umbria, the Calendimaggio, is to return to the city between May 6 and 8. 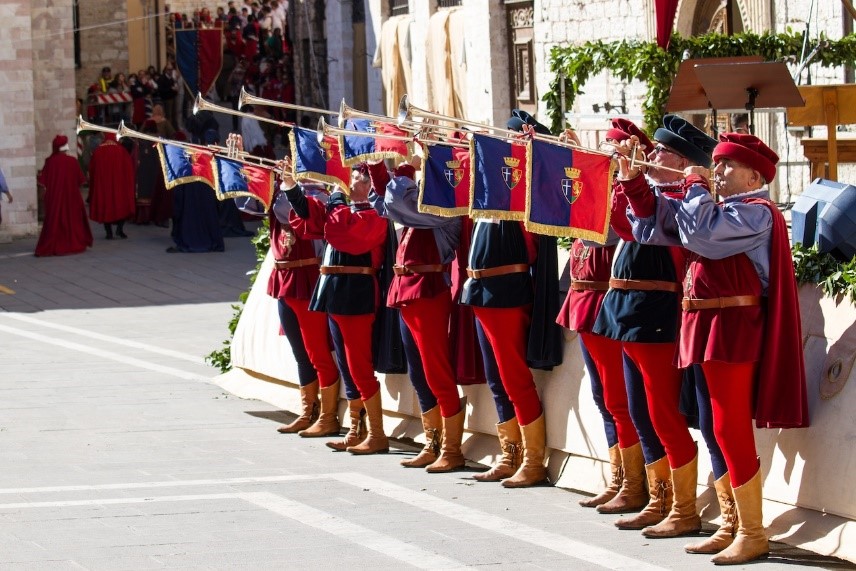 Like the city itself, the event has a varied history with roots in both Roman and medieval traditions, including the Roman celebration feast the Fasti di Maggio and the medieval Kalende di Maggio, which celebrates the arrival of spring in early May. A more recent element of the event’s history comes from the long-standing rivalry between the upper and lower parts of the town, stemming from the battles for supremacy that arose between the Nepis and Fiumi families in the 14th century. Today the rivalry is a friendly one and the two districts join together in friendship to celebrate the return of spring.

The festival takes place on the first Thursday, Friday and Saturday of May, and begins with the ceremonial handing over of the Keys to the City to the Master of the Field by the Mayor. A series of lively medieval games then unfold across the three days, deciding upon whom shall be crowned the festival queen as well as the winning district.

From the magnificent Piazza del Comune, the Parte de Sotto and the Parte de Sopra both put on their best show of processions of colourful costumed figures making their way through the town’s narrow streets and squares. Accompanied by clowning jesters, traditional dances, torch light and the sound of lutes and choirs, the processions really bring the history of this town to life. There are also plenty of surprises in store, as each side pulls out all the stops to win the applause of the crowd and the envy of their opponents. Love song competitions and traditional games also take place across the three-day event.

The event comes to a close on the Saturday with a choral battle, as a well as the final verdict of the judges, who decide which district wins the Palio and has given the best representation of the arrival of spring.