Ten foods you simply must try in Tuscany

Italy has to be one of the world’s greatest food destinations, with every region having its own individual cuisine harnessing the best of its local and fresh ingredients. Tuscany is no different, with its regional cuisine popular not only locally, but also nationally and globally. Though many of its dishes now have worldwide popularity, you just can’t beat trying the real deal during your stay at our hotels in Tuscany, so we’ve recommended the ten foods you simply must try while you’re there. 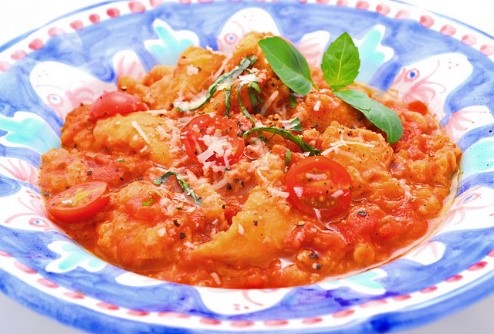 A popular starter in Tuscany, a crostini toscani consists of a chopped chicken liver sauce spread onto a bread, frusta, which is similar to a baguette.

A popular street food, especially in Florence, a lampredotto may sound strange at first but is definitely trying. Lampredotto consists of a cow’s fourth stomach cooked into a broth, served with a spicy sauce or salsa verde.

Panzanella is a popular salad where bread is the main ingredient, served with a classic Italian combination of tomatoes, basil, red onions, olive oil, vinegar and salt.

A variety of cured meat typically served as a starter, lardo di Colonnata is a pork lard cured in local marble, with products made in the town of Colonnata itself receiving the IGP quality certification.

Pappa al Pomodoro is popular soup with has taken the whole of Italy by storm, and is a simple combination of stale Tuscan bread, tomatoes, basil leaves and garlic.

Ribollita is another highly popular soup/stew dish and is a staple winter dish in Tuscany. It contains several kinds of cabbage, as well as onions, carrots and beans. Try your hand at making your own ribollita with our recipe here.

Another popular soup in Tuscany, Cacciucco is a seafood soup originating from Livorno and Viareggio, though each town now has its own recipe.

Known in English as the Florentine T-bone steak, Bistecca alla Fiorentina is a hugely popular dish which needs no introduction. The key to a perfect Florentine T-bone is to choose a meat of a high quality and the correct cut, as well as timing the cooking time to the perfect length.

Especially popular in the Apennine region, castagnaccio is a traditional cake made with ground flour. Delicious both warm and cold, freshly baked castagnaccio is best to try in the autumn and winter, when the chestnut flour still has its distinctive sweet taste.

Though any authentic Italian olive oil is a hit, Tuscany’s is famous for its pungent, vegetal and bitter flavour which gives it a whole new dimension. Harvesting of the olives begins in November, and are mainly picked by hand even today, before being sent immediately to be pressed and make the oil.