Recipe for your very own Puglian antipasti – stuffed aubergines

A traditionally agricultural region, the cuisine of Puglia thrives on its vegetables, locally grown in its fertile soils. Historically a poor region which couldn’t afford much meat, its food thrives on vegetables and fish caught off the coast, such as anchovies, yet the food doesn’t suffer without meat – many proclaim Puglian cuisine as the best in Italy.

If you’ve stayed at one of our villas in Puglia, you may have already fallen in love with the antipasti, or starter courses, offered at the region’s restaurants. Our recipe is for a Puglian classic, melenzane ripiene, or stuffed aubergines, and really demonstrates what Puglian cuisine is all about: fresh vegetables, a hint of fish and quality ingredients. 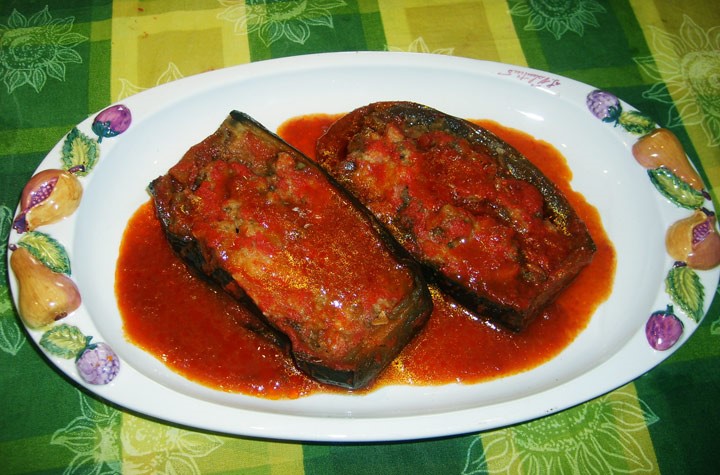 Place the halved aubergines into a pan of salted boiling water. Allow them to boil for roughly 5 minutes and then take them out. Once cool enough to handle, scoop out the pulp and chop it up.

Heat a little olive oil in a pan, then add the chopped garlic and gently fry. Add the anchovies, allowing them to ‘melt’ slightly, and then add the chopped aubergine pulp for a few minutes. Add the chopped tomatoes to the pan, season with salt and pepper and tear in a handful of fresh basil leaves. Let the mixture cook on a low heat until it forms a thickish sauce.

As the sauce cooks, heat the oven to about 220°C (425°F/Gas Mark 7). Once the sauce is ready, place the aubergines on a slightly oiled baking tray and spoon the sauce into the aubergines. Add as much pecorino cheese as you wish and then place in the oven for around 20 minutes. Once finished, sprinkle a little more torn basil onto the top and serve.