A guide to the attractions of Taranto, Puglia

One of the main cities located in the southern Italian region of Puglia, Taranto is not only a thriving industrial port and maritime base, but also a fascinating place to visit on your holidays in Puglia. Read on to discover the various attractions and other delights you’ll find throughout the city of Taranto. 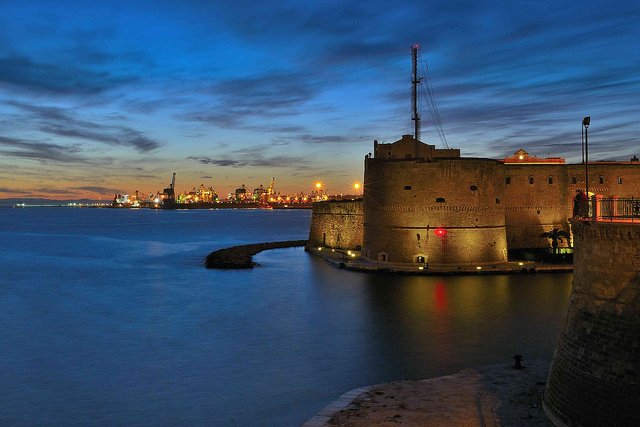 The oldest part of the city, the Citta Vecchi, lies on an island, connected to the main peninsula via two bridges. One of these is the rotating bridge, which is not only interesting to see but is also important in its function for the city. Not only does it connect the mainland to the island of the Old City, but it also allows for the passage of large ships. The main attraction of the Old City is the four-towered castle, built in 1492 by Ferdinand of Aragon; behind it you will also find the ruins of an ancient Doric temple, dating back to the sixth century BC.

Also located in the Old City is Taranto’s Cathedral. Dating back as far as 1070, the cathedral has had a number of different works done to it over the following centuries. Currently it sports a Baroque façade, as well as three naves and 16 marble and granite columns supporting the ceiling inside. A number of beautiful paintings can also be found inside the cathedral, including many frescoes by Paolo de Matteis from the 17th and 18th centuries.

The Cathedral is not the only magnificent religious building to be seen in Taranto’s Old City. The Church of San Domenico Maggiore, dating from the 11th century, is a Romanesque and Gothic-style masterpiece. Within the church you’ll find a single nave as well as an icon by Marco Pino from the 16th century. 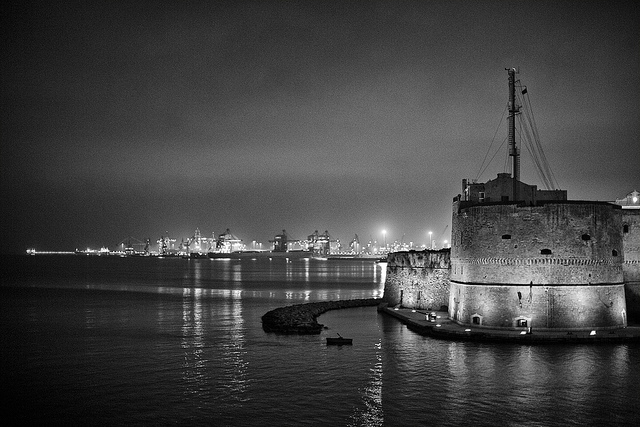 The Piazza Fontana is the ancient great square of the Old City, surrounded by a number of noble monuments and palazzi. Amongst the sites to be seen here are the 18th century clock tower, the Baroque style Palazzo Galeota and the Liberty style Palazzo Carducci.

Located in the ‘new town’ is the National Museum, which has 16 enormous rooms each dedicated to a range of historical artefacts. The first six rooms alone are dedicated to sculptures, depicting everything from mythological characters to battle scenes. Another area is dedicated to Attic ceramics, including an exceptional cup with banquet scenes by the painter of Heidelburg. Other areas house precious jewellery and ancient objects including everyday objects and weapons dating back to the prehistoric age.

Lined with palm trees, the Promenade is home to several important and impressive buildings. Among them is the Prefecture as well as another cathedral, which was renovated in the 1970s with a Gothic-style architecture.

Dedicated to an eminent 4th century BC mathematician who was a former resident of Taranto, the Square Archytas is another lively square surrounding by striking buildings. The ‘Office building’ dominates, with its carved façade sporting windows, ornaments and decorations. An interesting antique market, which also sells furniture and art, is also held in the square once a month.