Five of the top historical attractions to see in Assisi

One of the most popular cities to visit in Umbria, Assisi is revered for its incredible architecture as well as its connections to St Francis, making it especially popular among religious tourists. The streets of this medieval city are lined with impressive landmarks as well as a number of authentic family restaurants and shops selling all kinds of local goods and souvenirs, making Assisi a fascinating city to visit during your stay at one of our Umbria apartments, hotels or villas. Read on to discover some of the most impressive historic landmarks the city holds within its borders. 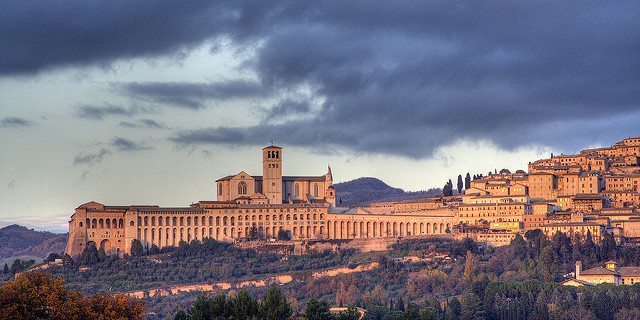 Undeniably Assisi’s most famous landmark, many of the cobbled streets and alleyways winding their way around the city eventually lead to the Basilica di San Francesco, a vast 13th century religious site now awarded the status of being a UNESCO World Heritage Site. Using the audio guide is highly recommended as you explore both the upper and lower basilicas, containing many smaller chapels such as the chapels of St Mary Magdalene and St Louis of Toulouse, revealing in great detail the history and hard work behind this impressive building. The crypt of the basilica’s namesake, St Francis, can also be found here, his remains found downstairs from the lower church.

Also dating back to the 13th century, the Basilica di Santa Chiara is instantly recognised by its façade, made from a mixture of seemingly glowing pink and white stones. The daughter of an important nobleman, St Clare, the basilica’s namesake, is actually buried in a crypt here. Inside the basilica are a range of impressive and colourful frescoes, as well as a number of paintings, some up to 600 years old, adorning the walls.

Located close to a number of other attractions such as the Palazzo dei Priori, Piazza del Commune and the Municipal Tower, the Roman Temple of Minerva is an excellently preserved landmark from ancient Italy, and is at least 2000 years old. The grand exterior is dominated by a grand flight of stairs and six towering stone columns making it truly unmissable. The temple has a rather Baroque character after it was converted to the Church of Santa Maria Sopra Minerva in the 17th century.

The Cathedral of San Rufino is a landmark of many influences – though it was constructed in the 13th century, it has an unmistakable Romanesque character, and also boasts some more modern features after having been remodelled during the 16th century. Home to some of the city’s grandest architecture, the exterior is decorated with grotesque animals and figures, as well as beautiful rose windows. The cathedral is also of historical significance, as the fountain is believed to have been where both St Clare and St Francis were baptised, and ancient Roman remains also still stand on the site.

Lying beneath the Piazza del Commune are the archaeological remains of a Roman forum, which date back to the first century. The remains of the forum can be easily accessed through a number of passages, stemming from the Museum Civico, while an increasing number of shops also open their basements to show off the ancient wonders that lie below the town square.