Explore the magical caves of Ispinigoli in Sardinia

Situated just north of the town of Dorgali lie the caves of Ispinigoli (Grotta di Ispinigoli), offering a descent into an underground forest of glittering stalagmites. 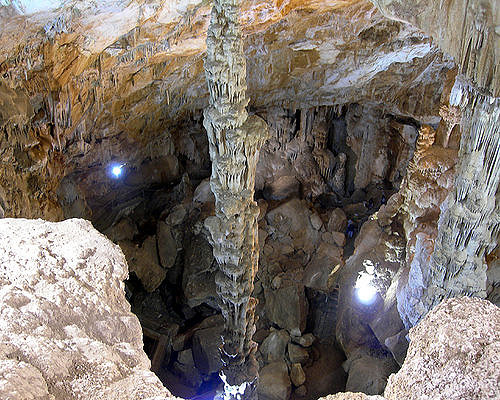 The caves were not first explored until the 1960s, and since then, a vast network with 15km of caves and eight subterranean rivers has been discovered. For experienced cavers, tours of up to 8km can be booked with organisers in Dorgali and Cala Gonone.

Upon entering the cave, you descend 60 metres under the ground, passing concrete structures carved from the walls that resemble grand columns, reaching the bottom of a giant ‘well’. Light dances on the yellowish limestone rock, providing a glittering and dazzling display of various lights, colours and hues. Small stalagmites set the scene for the main monument of the well, a magnificent 38m high stalagmite, the second tallest in the world, while rock formations sprout from the walls like enormous mushrooms.

Previously used as a shepherd’s refuge, the cave has a rich history dating its use back to ancient times, and has been a site of significant historical interest in recent decades. Among the items discovered here are tiny human remains, jewellery, and solar symbols, which have revealed the existence of a Phoenician sacrificial well, a second cavity known as the Abyss of the Virgins. After much investigation, it is believed that the Phoenicians carried out rites of human sacrifice by throwing young girls into the pit. This second well is difficult to access, but on a standard tour of the cave you are still able to peer inside.

Nearby is a hot water spring, perfect for a relaxing dip, as well as a restaurant serving authentic Sardinia cuisine, making Ispinigoli a perfect way to venture out from our villas in Sardinia.