Explore Mount Etna before you visit with Google Street View

If you’re planning on scaling the heights of the epic Mount Etna on your travels to Italy, you can now find out what it is like to climb the famous volcano before you go from the comfort of your own home, thanks to Google’s Street View adding it to their growing list of natural wonders. 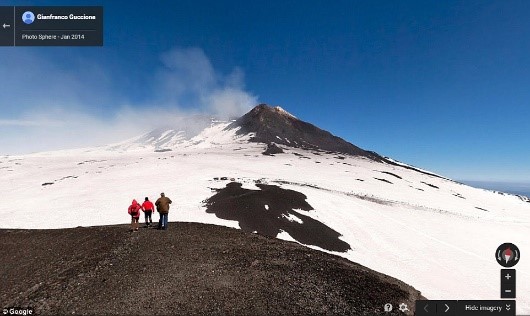 The two interactive maps offer up 360° views of the Silvestri and Silvani craters, as well as the snow-topped summit of Mount Etna, showing you a slice of what you can expect and the views on display from the top.

The announcement comes just as Mount Etna celebrates two years as a member of the UNESCO World Heritage List, with Google saying that the imagery they have captured not only enables anyone in the world to explore the beautiful mountain, but also helps to ‘enhance the cultural and historical heritage of the Sicilian territory and its beauty’.

The views were captured by the Google team, who journeyed to the summit of Mount Etna on foot, in comparison to the regular capturing technique of using the Street View cars. Each person wore a 360-degree Trekker camera on a backpack, capturing views of Crater Silvestri, 2000m above sea level, and Crate Silvani, 3000m above sea level, on their way to the top.

In some of the images, you can find some of the volcano’s famous black basalt, caused by the gradual solidification of volcanic lava flow. Mount Etna itself stands over 3400m above sea level, and can be seen looming in the distance all over the island of Sicily. It is one of just a few remaining active volcanoes in Europe today, though its eruptions are rarely ever dangerous.

If you’re planning a stay in wonderful Italy and are wondering where to stay in Puglia, Abruzzo, Sicily, Sardinia, Tuscany or Umbria, visit our website for a great selection of great holiday accommodation.