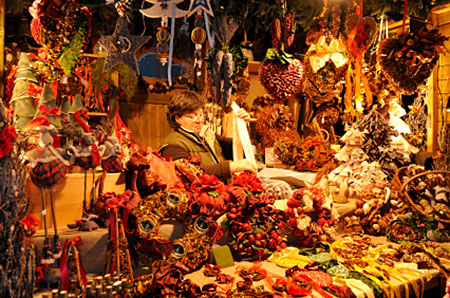 Christmas season in Italy is traditionally celebrated from 24 December to 6 January, or Christmas Eve through to Epiphany. This follows the pagan season of celebrations that started with Saturnalia, a winter solstice festival, and ended with the Roman New Year, the Calends. However there are lots of Christmas things to see during December prior to Christmas, many starting on December 8, the Feast Day of the Immaculate Conception.

Although Father Christmas, or Babbo Natale as he is known, now respects the date of 25 December, presents often were exchanged on 6 January better known as Epiphany. This is the 12th day of Christmas when the three Wise Men gave Baby Jesus their gifts. In Italy, presents are brought by the Befana or the witch, who arrives in the night to fill children's stockings. This kindly old witch, according to the legend, was stopped by the Three Wise Men  as they needed directions to get to Bethlehem and they invited her to join them. She refused and later a shepherd asked her to join him in paying respect to the Christ Child. Again she refused, and when night fell she saw a great light in the skies. La Befana thought perhaps she should have gone with the Three Wise Men, so she gathered some toys that had belonged to her own child, who had died, and ran to find the kings and the shepherd. But la Befana could not find them or the stable. Now, each year she looks for the Christ Child. Since she can not find him, she leaves gifts for the good children of Italy and pieces of coal for the naughty ones!

Christmas decorations and trees are now very popular in Italy with many decorations going up around December 8, the Feast Day of the Immaculate Conception. The nativity scene, crib or presepe is perhaps the most important "decoration" and almost every church will have one inside or out – living nativity scenes have become very popular with the locals dressing and acting out the scene.

Traditionally, a meatless dinner is eaten on Christmas eve with the family, followed by midnight mass. In parts of southern Italy an enormous 7 course fish dinner is served on Christmas Eve. Dinner on Christmas day is usually a long and elaborate meal with an array of antipasti, home made pasta dishes followed by a meat course (turkey in the north, lamb, pork and beef in other areas) and then finished with the traditional panettone. Needless to say, spumante,  liqueurs,  red and white wine will flow throughout the day!

Here is the Italian Christmans calendar from start to end:

26 December: La Festa di Santo Stefano – St. Stephen's Day marks the announcement of the birth of Jesus and the arrival of the Three Wise Men