If you’re looking to stay in one of our villas in Tuscany this autumn, it’s the perfect time of year to sample a whole host of local traditions, products and events. One of the products celebrated in Tuscany during the autumn is the humble chestnut, with the Mugello region in particular being a great place to head to. Lined with chestnut groves, it also has its own delectable variety of chestnuts, Marrone Mugello IGP. 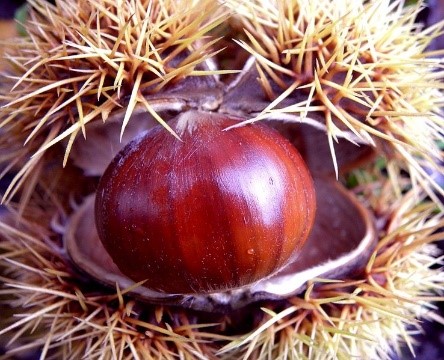 The town of Marradi especially is well known for its chestnuts, as it was historically a prime staple of the diet in this mountainous area of Tuscany. One of their local delicacies is the castagnaccio, a flat cake made with chestnut flour. Casentino and Garfagnana are also two other regions known for their chestnuts, found in the Apennine and Apuane Alps respectively. In several towns and villages throughout Tuscany, you can purchase local chestnuts in the local markets and shops, while you can also try some delicious roasted chestnuts (caldarroste) from street vendors.

During October, several Tuscan villages even celebrate the chestnut with its own festival, the Sagra delle Castagne, as the harvest begins, where chestnuts are incorporated into dishes and desserts of all kinds, including pasta, polenta and cakes – a testament to how important seasonal produce is to the Tuscan diet.