A guide to Volterra, one of Tuscany’s best hilltop towns

Situated less than an hour from tourist-packed Florence, the hilltop town of Volterra, near our Tuscany hotels, is a change of pace to the larger Tuscan cities, offering a unique heritage that dates back thousands of years. 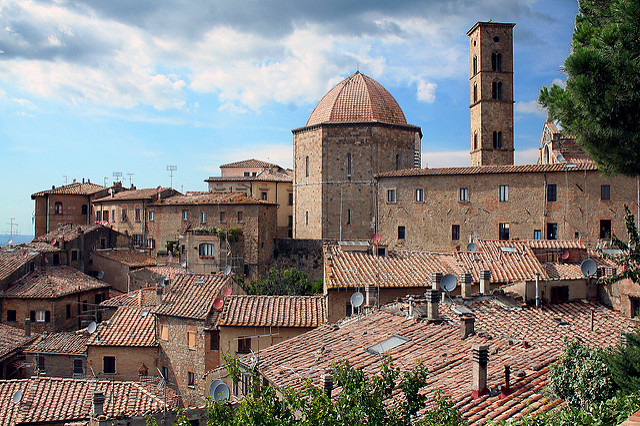 Volterra’s origins can be traced back over 2,000 years, when it was established as one of the most important Etruscan cities and a key centre for trading. This can still be seen in what remains of a four-mile-long wall – today, around half of this is still visible, as well as the mighty gate, built from enormous volcanic stones.

Though this northern Tuscany town is small, its Etruscan heritage means that it is bursting with precious artefacts, most notably at the Etruscan Museum. Here you’ll find carefully crafted jewellery, etched mirrors, and a vast collection of urns, demonstrating the importance to the Etruscans of the afterlife.

Reaching back to another period of history is the town’s city hall, which is around 800 years old and claims to be the oldest in Tuscany. Like many other historical city halls, it demonstrates the former power of the city state, its architecture reminding people of when the city administration had control over the emperors and popes.

Besides its Etruscan past, Volterra is also extremely famous for its alabaster, a translucent mineral which was sliced thin and then used to provide windows for Italy’s churches from the medieval period onwards. This translucent mineral became highly popular to work with as it was softer and easier to work with than marble. Across the way from the Etruscan Museum, you can still see artisans at work with the alabaster, creating all kinds of traditional wares. Its alabaster heritage has also attracted other kinds of artisans to the area, and on Via Porta all’Arco, you’ll find a lane lined with shops stocking all kinds of crafts, from bronzeware to leather, bookstores and jewellery stores.

Visitors will also enjoy immensely just wandering the streets of this small and rustic town, with the majority of the medieval buildings looking pretty yet humble in comparison to the dominating Palazzo dei Priori, a building which would not look out of place in Florence. One thing’s for sure – the quiet streets of this town will make you feel like you are journeying through the real Tuscany, and offer something different to the usual cities with an engaging mix of rich history, great beauty and a traditional Tuscan atmosphere.